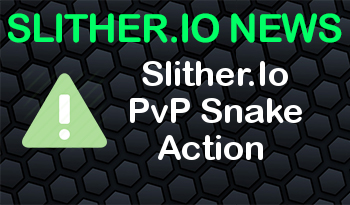 Unless you’ve been using an old flip phone and a stone tablet, you’ve heard of or played Agar.io. A massive multiplayer online game, you play as a cell with the goal of becoming the biggest cell. As with most trendy games, the popularity of Agar.io spawned a spate of similar themed games under the .io domain, all challenging me to not smash my tablet against the wall every time my blob named Jerry gets absorbed by a larger blob. Between lag and my inability to react quick enough I cannot fathom why I’m still playing these games or why I’ve become so addicted to the latest hotness, Slither.io.

I also have no idea why these games are using the .io extension, as it has been around for a while and was originally created for British Indian Ocean Territory websites. Regardless, they are using it. It’s short. Like my lifespan playing Slither.io. I’m pretty much the worst snake in existence, have never been on the leader-board and am unable to properly boost myself out of a jam. I’m even worse at Agar.io and don’t stand a chance in Diep.io. Yet, I can’t shake the addiction.

It should be noted that have wasted a lot of time playing Cookie Clicker. So I’m no stranger to wasting time on the internet these days. I also write stuff like this, so my every action online can be legitimately questioned.

I have found Slither.io to be more entertaining than Agar.io for an indeterminate number of reasons. The first is that I feel more accomplished as that tiny snake when I get someone to bump into me and they burst into a bunch of shiny glowing orbs. The second reason is that it just looks better. There is a graphical lag, but that will eventually be sorted. The third reason is that it’s an even playing field. Any size snake can take down any other size snake. Tiny snakes can get in front of a giant snake. Every player is fair game. I personally like to play the role of hyena and just hang around the center and wait for a big snake to destroy another big snake and grab the scraps before they can circle back around. Delicious!

My reaction time is about as fast as a dead pigeon escaping your tire tread on a dark road. My teenagers scoff at my meager scores. Players around the country giggle at my tiny snake and point at their screen in abject disgust. Why bother playing when I’m so terrible at the game in which I name my snakes things such as “will die next” and “your lagging soul”? Because for a few moments, as my snake grows from sucking down the colorful orbs I have some hope. Some hope that one day my snake will be number one and all other snakes shall bow at my greatness. Or because I’m eating lunch with one hand and there is nothing good to watch on YouTube. It’s a toss up.

I can only play these games for a few minutes at a time. I’d call them bathroom time wasters, but I can’t play them on mobile. I can’t see past my finger to properly navigate the arena. Instead I play on the browser while waiting for time to pass, waiting for the Earth to rotate on its axis, spinning around the sun, getting closer to my eventual death. I imagine these apps will soon reside within the realm of virtual reality, our eyes guiding our VR snakes. Slither.io is fun for the time being and might be the successor to Agar.io but still feels like a stepping stone to a much more popular .io game that hasn’t been released yet.

While Agar.io, Slither.io and now the tiny tank shooter Diep.io are currently the most popular of these PvP games, there are a ton more out there which indicates there are more to come even after these fade away. Supersnake.io, Vertix.io, Vanar.io, Cursors.io, Blong.io, Wings.io and WarBall.io to name a few. If you want to get out of the browser or app, there is Father.io, which is real life laser tag. If you’ve been playing nothing but tablet games for months, you might not have the stamina for that though.

Slither.io is another entry in a storied history of PvP gaming app development that serves to entertain and challenge us with the harmless destruction of others. Or is it so harmless? Do you delight at the terminal mission of your snake as I do? Do you feel the sense of power when you enter the leader-board as I never have? Unlike Agar.io it feels less random, more skill based and more in touch with my emotions about snakes in an online Thunderdome.

Seriously though, the single best thing about Slither.io versus Agar.io is I’m yet to see a snake named “doge”.