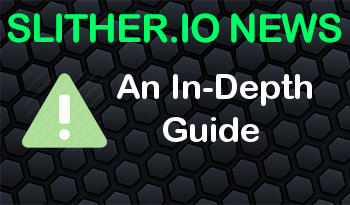 You just picked your favorite skin (Worm-colored), your witty nickname (“First Place”) and you press that beautiful, green, “Play” button. You play for 3 minutes and you die at 3000. You furiously press “Play Again,” and die at 2000. I’m here to help you break that cycle. I see a lot of posts from people asking for tips I decided to write a full-on exhaustive guide. I’ve been playing Slither.io for some time now and I wanted to share everything I know about the game for players who are either just starting out or players who have been playing for a while, but can never quite get those ridiculous high scores.

I will divide the guide into sections based on the size of your snake. Bold = Snake Size (i.e. the number on the bottom left of the screen)

0-200: Start picking up dots immediately. Your goal is to get to ~100. Brighter dots = bigger size gain. Don’t be scared to give up all of your size accelerating to pick up glowing dots. Each glowing dots = ~80-150 size. Slowly migrate towards the center of the map. Avoid other snakes at this point.

200-3,000 This is where the fun starts. YOU ARE NOW A PREDATOR. Your size and tail length allow you to be the most agile predator on the map. Your goal is to find snakes that are slightly bigger than you, and cut them off, forcing them to run into your tail. Collect the remains. IMPORTANT: DO NOT BE GREEDY. It’s okay to forfeit 80% of your kill to other snakes. On the other hand, DON’T BE SCARED TO TAKE OTHER PEOPLE’S KILLS.

3,000-5,000 Start migrating from the center to the periphery of the map. Make your kills along the way, but againDON’T BE GREEDY take what you can. You should hit 5,000 just from picking up scraps going from the middle to the outside.

5,000-25,000 You are now a constrictor. This is the hardest part of the game. You are not cutting snakes off anymore, you get the majority of your kills by looping around snakes and suffocating the life out of them. Your Target: Medium snakes and Bots. Bots are STUPID. They are programmed to avoid collision but they are NOT programmed to avoid getting looped and suffocated. Here’s a quick list on how to identify bots:

Side Note Do not be afraid to attack VERY LARGE snakes at this point in the game. Big snakes have a HORRIBLE turn radius. If you can get under their nose, they’re dead. Do not be afraid to put yourself into a dangerous position to kill a big snake. Killing one big snake on the periphery means you get all of the remains to yourself. It should propel you 3-7k from 1 kill.

25,000+ Congratulations. You won. This is the end-game snake. Here is how you get those ridiculous scores (100k+). You migrate your way to the center of the map (this is the hard part) and you make the biggest loop you can (with no snakes inside) You keep spinning around in that loop, and due to the natural chaos in the center of the map, snakes will be forced to run into you, DO NOT break your loop, slowly consume snakes that run into you on the next revolution. Your head is invulnerable because you are overlapping your tail 90% of the time, only occasionally breaking your big loop to gather remains. At this point in the game, the upper limit of your score is the upper limit of your patience. I usually grow about 2k every 5 minutes while in the center.

Good luck friends, I hope you find this guide helpful, I will leave with some general tips that don’t really fit into the guide: