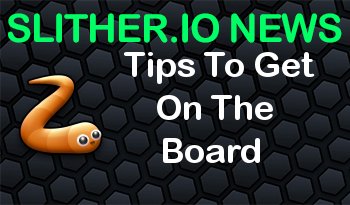 1: Someone has to come out as the winner. Make sure you are that person.

Huge snakes are created and destroyed in huge battles consisting of another snake dying. Lots of other snakes will swoop in and try to collect the remains, only to die themselves, setting off a chain reaction. The person who comes out on top in battle is the last person to join the fight. Try to make sure you are that person. By staying near the back of another larger snake, not only will you be able to collect pellets created by the “host” using a speed boost, you are in perfect position to collect their dead body should they die. Stay near the edge of the fight, but never join it. Let everyone else do the work for you.

This one almost goes without saying. Staying in the middle of a massive snake fight is bound to get you killed. Don’t try to make it to the top of the leaderboard in one fell swoop. It takes 6 or 7 instances of scavenging a huge fight before you make it to the top ranks. Be very conservative in how long you stay before leaving a slithery slugout. As a rule of thumb, make sure that you never have to use a speed boost defensively. This is more likely to kill you accidentally than another snake is. Stay safe.

This tip, though sounding similar to #2, is actually completely different. It’s the best thing you can do to grow once you’re already big. Just remember that pellets littered across the map aren’t below you, and you should be taking every chance you get to grow larger, no matter how slightly. A play that spends downtime between fight collecting pellets near the edge of the map will be much larger than a player that just sits in the same place for 3 minutes waiting for a fight to break out. Your end goal is to get as large as possible, after all.

Follow this person. It’s alright to go on detours if you see a juicy clump of pellets or a larger snake, but your head should never be too far away from the tail right in front of you.

Profit. Once a fight breaks out, grab pellets until you see another snake nearby, then run as fast as you can. You want to escape the fight as quickly as possible, then wait near the edge hoping to make one final grab. Once it’s clear that there is no benefit to re-entering the fight, go wait somewhere else until you can find another snake bigger than you. Rinse and repeat.