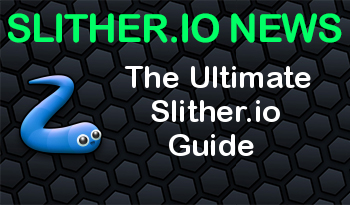 I have been playing slither.io for quite some time now, and although I am surely not the best playerin the world, I can offer some tips and a guide to easily slither.io your way into the leaderboards.

This guide will guide you through slither.io through four different stages of your little creature’s life by size.

At this stage, your itty bitty worm is a very insignificant being. Do whatever it takes to get you to a respectable size. Just go super aggressive at this stage; if you die, just start over because you haven’t wasted any time. You want to get out of this stage as soon as possible. I consider 200 to be a size where you can speed boost long enough to kill other snakes without losing significant amounts of body mass. For now, just eat eat and eat more. Hopefully, some of the bigger snakes won’t even consider you worth their time.

Things you might want to consider: Always slither your way towards the middle. That is where all of the action and the BIG snakes are. You can’t choose where you spawn, but the map in the bottom right corner should easily guide you towards the middle. Although there is also significantly higher risk in the middle, you came here to have fun, not to slither around safely for eternity.

At this stage, you are primarily doing one thing. Scavenging. Some people may argue against me that doing this is boring, but I personally find it the easiest way to gain body mass at a considerably low risk. After grinding through the early stages of snake life, you really don’t want to start from the beginning all over again.

So what do I mean by scavenging? First find a “target”. I put the target in quotes because you will not be directly attacking this target. What you will be doing is following the target around and around until he makes a fatal mistake. That’s when you slurp up all of his body mass for yourself!

So what kind of target are you looking for?

The best targets are:

And what do you do when you find your target? You Follow.

Follow their tail. Make sure you never lose sight of the tail.

There are several advantages to this:

When your target finally dies, which you probably had nothing to do with, that’s when feeding time starts. Boost. Boost. BOOST UNTIL YOU GET EVERY SINGLE BODY MASS OF THAT HUGE MOTHERF***

Alright, you definitely don’t want to go for every bit of mass. A very common strategy in slither.io is to simply slurp up big snakes that recently died, meaning that you’re going to have competition, most notably the sly slythering slytherin that just killed your target for you. This is where reaction speed is crucial. As you boost along the length of the body mass, keep an eye out for another snake boosting in the opposite direction. As soon as you see one, JERK! Remember that since you are going in opposite ways, it will require half the reaction speed. Jerk away and slither yourself to safety.

The advantages to this strategy are pretty significant. Since all killings of bigger snakes occur at the mouth of the snake, that means the killer, who usually has first access to the corpse, will start near the head. But in order to do that, they need to perform some fancy maneuvers to position themselves to get as much mass as possible. You, on the other hand, will be able to see that the snake died at the same time as the killer, except you will already be in the perfect angle to start chomping away.

Essentially, you have a huge advantage in collecting body mass over any killer of a huge snake, while THEY are the ones risking their lives while you sip on tea and munch on speed boosting remains.

Once you hit 5000 body mass, this stage is virtually over since it will take longer to find any target significantly bigger than you.

At this stage, you have most likely placed on a respectable spot on the leaderboard. Do NOT take a screenshot and send it to your friends. The first time that I hit No.1, I took a screenshot, which froze my computer screen for about half a second to let me decide the area to screenshot, and I found myself dead. At 75k body length. Depressing. Also remember that rankings are merely a list of the highest scoring players at the exact time and server you are playing, and screenshotting your score is just as impressive.

So as I wrap up my guide and seriously question my life choices to write this over studying for APs, I’d like to thank everyone who kept reading until the end.