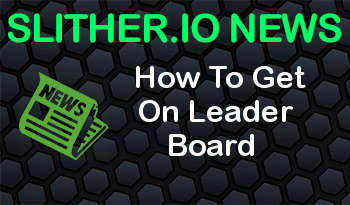 Slither.io combines the classic eat-em-up experience ofSnake, the granddaddy of all mobile games, with massively multiplayer action. Slither.io started as a web-based game, but made the leap to iOS in March of 2016. It’s just had a major update this week and it continues to sit at the top of the free app charts. A big part of the appeal of the game is the leaderboard, where the names of the ten longest snakes are displayed. It can be a thrill seeing your name on the board, and even more exciting if you become the longest snake of the week. If you achieve that incredible feat you can leave a custom message for all players to see… at least until a bigger snake comes along. With a few simple strategies it should be possible for anyone to break into that top 10 leaderboard. 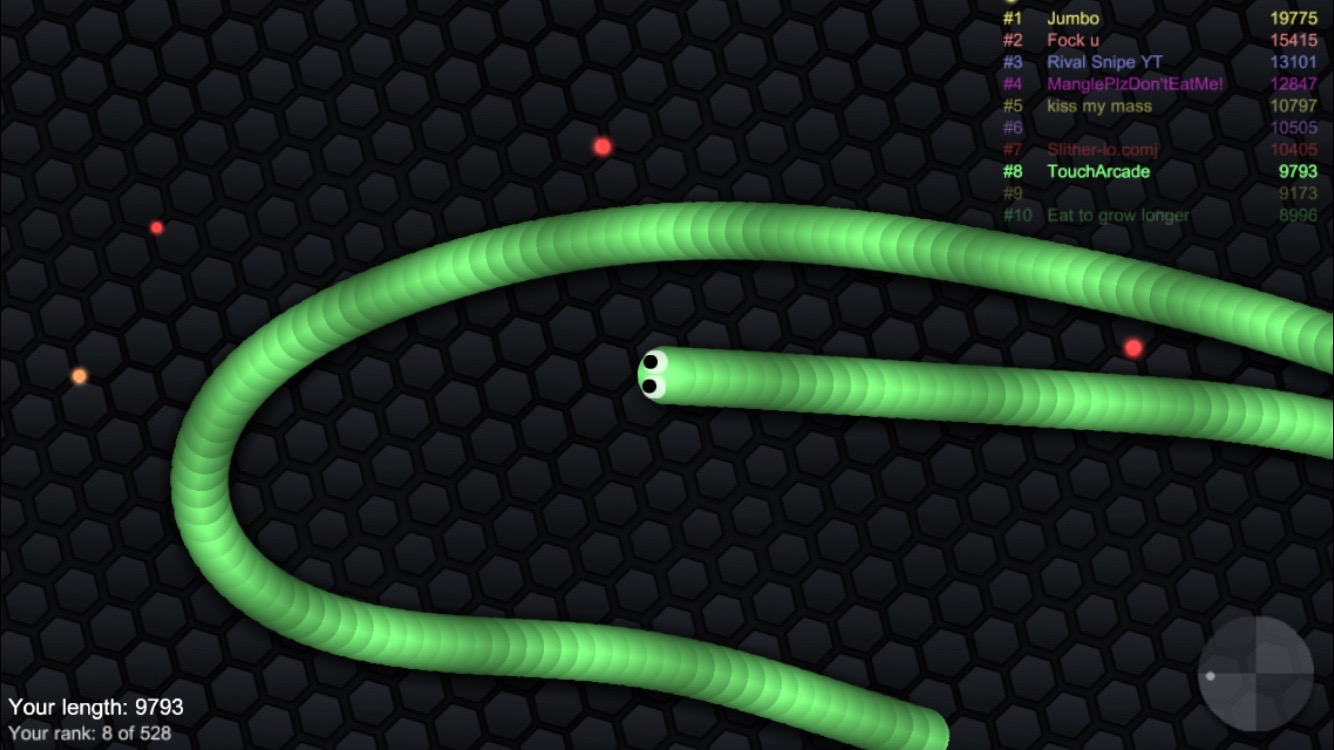 First: know the basics of the game. Eat the dots to make your snake longer. Protect your face, because if if touches another snake or the outside wall then your game is over. Crossing over your own tail is fine, It will not kill you and in fact is a good way to protect yourself.

Step Zero: Name your snake. The leaderboard is always populated with creatively named snakes, from the funny to the obscene. Be aware that rude words are filtered out and will be replaced. You can skip naming your snake if you like, but where’s the fun in seeing a blank space on the leaderboard?

A snake starts out small, and it usually doesn’t pay to get aggressive early on. Look for an area with lots of dots and just work your way back and forth eating them all. If you find yourself having to travel too far between meals then cruise around and look for better feeding grounds. In a good area with lots of food you should be able to reach a length of 1000 in only a minute or two, but if you spawn somewhere with very few dots to eat you may need to cruise around a bit. When you’ve hit a length above about a thousand finish chewing and move on to scavenging.

Now that you are not easy pickings for small or medium sized snakes it’s time to look for bigger meals. Head towards the middle of the map looking for snakes that are a little bigger than you. Stay near them and watch, munching on whatever dots you can without risking your life by getting pinned between 2 snakes. You are looking to stay safe and maybe get an easy meal. At this point you can stop outright running from other snakes and stand your ground, provided you play smartly and defensively.

When a snake is killed it turns into food. This is when surrounding snakes will make the most common mistake in Slither.io, charging lengthwise down the trail of food at top speed. The problem is that other snakes will get the same idea, and then they all run into each other. This can cause chain reactions as more and more snakes dive into a huge feeding frenzy and collide. A smart snake will boost across the trail of food, dividing it in half. This sets up a roadblock that can potentially kill snakes taking the straight across approach. Cross back and forth along the trail of food until you’ve run out of space, then curl up and munch. You’ll stay safe and you might even take out some overzealous speeders. 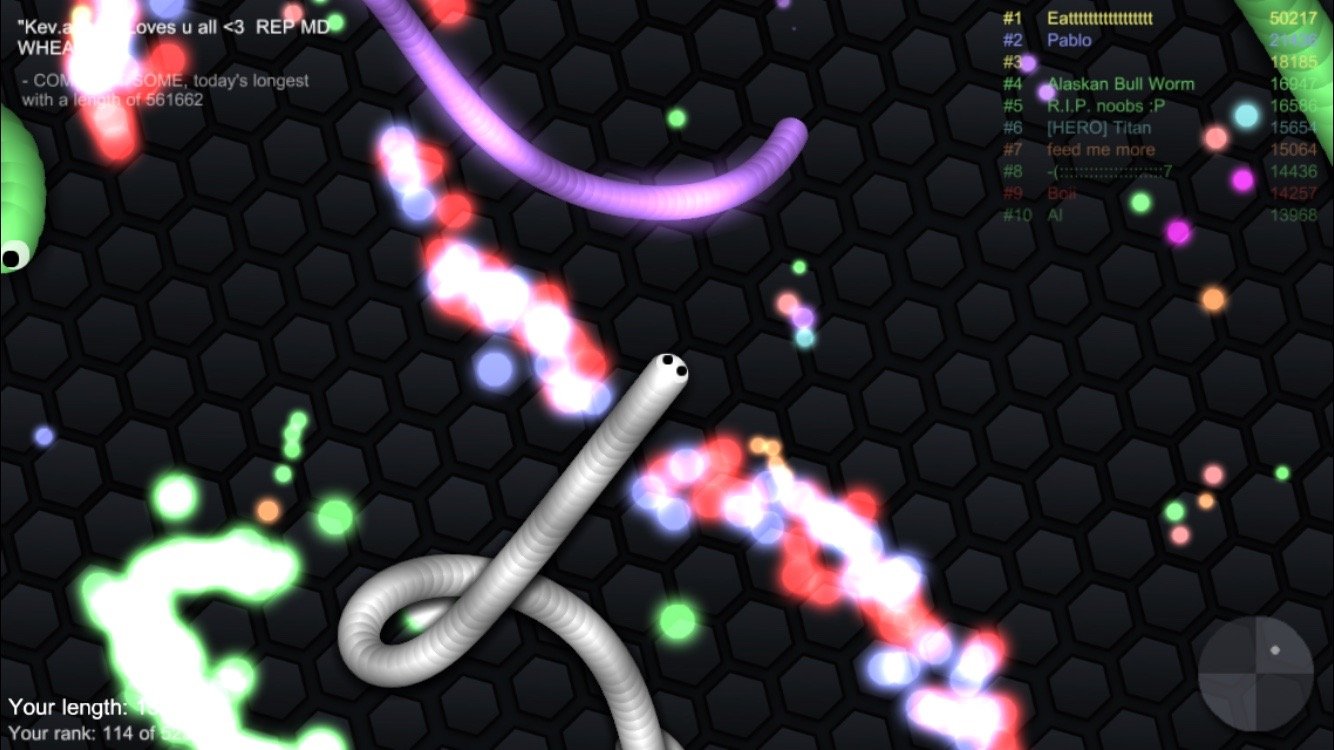 If you encounter an aggressive snake that seems like he’s trying to cut you off, you can easily defend yourself. Remember that only your face is vulnerable. If you can put your body between your face and your potential attacker then you can’t be hurt. Most aggressive snakes are also impatient and if you defend yourself well for a few moments they will move on looking for easier prey. Here are two defensive strategies that work, both are focused on keeping your face protected.

Curl Up: If the only snakes around you are not much larger than you then the safest thing to do is to roll up into a circle. Spin away from the enemy snake and loop back to your own tail. Once you have created an enclosed area just stay inside. No enemy can cross your tail, and so you will be safe as long as you keep circling. This can be a bit of a dangerous strategy long term because bigger snakes could take this as an opportunity to encircle you, and if you are encircled there is essentially nothing you can do.

Loop back: If you double-back and away from your opponent and retrace your path (essentially folding your snake in half) you have instantly created a wall between you and them. Because you can cross your own tail you can easily dodge snakes on either side of you as long as you are cruising along your own tail. This is a quick way to get to safety, but it does not work well until you have a long tail or if you are surrounded on all sides by aggressive snakes. 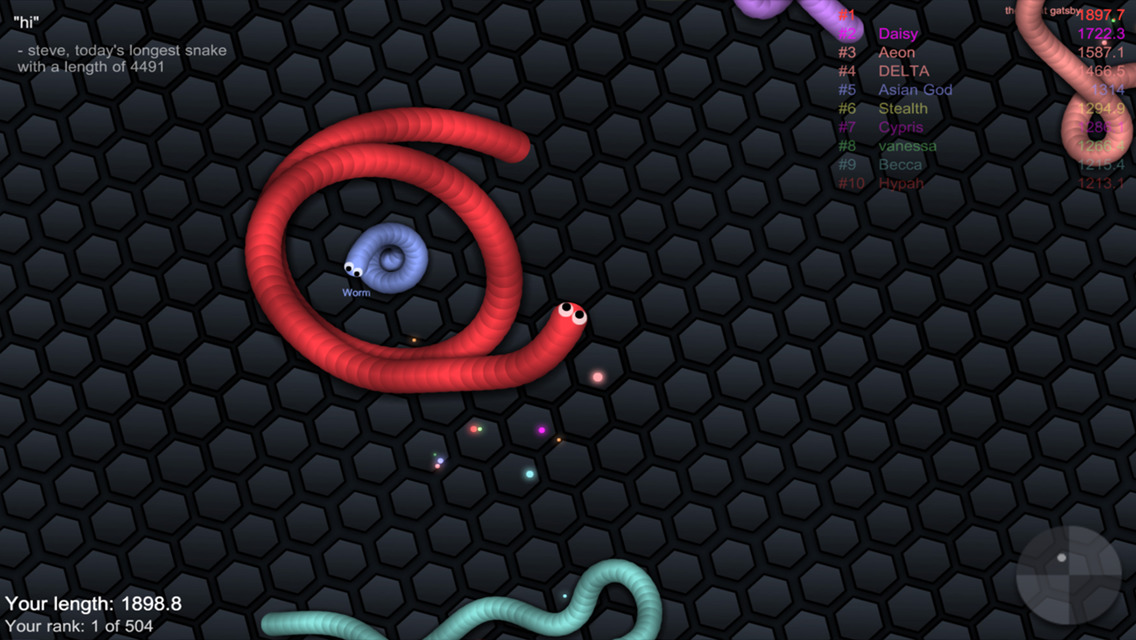 When you are big your turning radius starts to widen, and it becomes harder to surprise enemies and cut them off. You’ll also start to attract the attention of smaller snakes who want to swoop in for a meal when you die. At this point your goal is to always be safe. Keep circling and only exit your spiral if you have a very clear path. Your huge wide head will actually help here, because you can vacuum up wide swaths of food. So your goal here is to just continue to eat while staying safe and laying the occasional trap for snakes much smaller than you. Look for large areas of food that you can slowly encircle. If a small snake enters your trap, great. If not that’s fine. Make a safe basket and eat everything inside before carefully moving on.

Hunting other snakes is fun, probably the most fun thing about this game. That said, it’s very dangerous. If you’re trying to get onto the leaderboard then playing slow and steady is the best way. However, eating somebody gives you much more food than slowly foraging, and if you can take on an opponent and win without exposing yourself then you should. Here are some offensive strategies and their drawbacks.

Trap Them: Lurk on the edge of a group of smaller snakes, making long and lazy loops. The goal here is to tempt a small snake into your clutches. Look for an opportunity to completely encircle the smaller snake. If the snake is too big, don’t risk it. Your goal is to pretend to be eating, all the while you are constantly just one quick dash away from forming a complete closed loop. It really helps if you do this in an area with lots of available food to tempt the smaller snakes.

Cut Them Off: The most dangerous position in Slither.io is running side-by-side parallel to another snake. If you find yourself in this situation the safe thing to do is a loop-back, but if you’re a small hungry snake sometimes you want to try your luck. The trick is to boost and turn towards your opponent, doubling back around them and not giving them the room to fully turn themselves.

At this point you’re probably in the top 20 snakes or so. You’re close to making the leader board. From here on out it can be a bit of a waiting game. It’s almost impossible for one really huge snake to hunt down and kill another, the danger from small opportunistic snakes is too great. The best way onto the leaderboard is to play it safer than your opponents. By now you will surely be seeing how aggressive the small snakes with nothing to lose can be. Your enemies on the leaderboard are dealing with the same thing. I’ve had times where I got over 5000 feet long then just chilled out near the edge of the map avoiding all snakes, and even though I wasn’t getting any longer I would slowly creep up the rankings as my rivals got picked off.

Slither.io has just been updated with the ability to pay to remove ads as well as a new control scheme. Users can now choose between the tap to turn control scheme and the virtual joystick. The new control scheme is a huge improvement because it allows precise control, is more comfortable, and keeps you from blocking the screen with your finger. It helps to make the mobile version nearly as accurate to control as the desktop browser version.