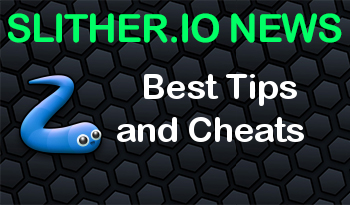 You may remember a game by the name of “agar.io” a couple months ago that got popular very quickly. Today, we have for you slither.io! Slither.io plays just like agar.io, but with the rules of the classic game “Snake” implemented! Make other snakes collide with your body to make them explode, then eat their remains to grow longer. The longest snake on the server becomes the top snake of the leaderboard, so we are here to help you with our slither.io cheats, tips and tricks strategy guide to becoming the best snake!

1. Use your speed boost!

Trapping opponents is the name of the game here, and to do that, you’re going to have to outwit them and outmaneuver them! You can speed up by double tapping the screen and holding. Your snake will begin to glow and you’ll be moving at a considerably faster pace! For as long as you hold your speed boost, you will be constantly losing length at the tail end of your snake; a trail of small particles will be left behind as you move. You lose length at about 5 per second, but it’s worth it if you can secure a kill!

2. Stay away from others for easy growth!

At the bottom right corner of the screen, you’ll see a little circle split into four quadrants. There’s a little white dot on it, as well. That dot represents you and your current location on the map. Turns out that the world of slither.io is kind of big, so you can explore around if you want. If you prefer, you can avoid the conflict that is usually occurring around the center of the map by drifting off into the outlands. Here, you can quietly absorb stray particles without a care in the world.

3. Hunt others for lots of particles!

… Or, if you like, you can take a much more aggressive approach. Once you’ve got a bit of length on your snake, you can try to take down other snakes. By taking advantage of the speed boost mentioned above, you can pull some sneaky surprise attacks. You’ve probably noticed by now but the turning speed in this game is a little slow, depending on where you tap. You can take advantage of this by riding alongside another snake, then quickly speed boosting to overtake them and try to make them crash into you. Hopefully if you do it fast enough, they won’t be able to react quickly enough and they’ll slam straight into you.

4. Watch out when you get big!

Remember, the bigger you get, the bigger the target is on your back. Other players will constantly try to find ways to slip you up, so be on guard at all times! Of course, you have the upper hand, and if you have plenty of length to spare, you can easily surround and trap another snake if you’re long enough. It’s also important to note that unlike the classic Snake, you cannot crash into your own body, which means that even when you get outrageously huge, you won’t be able to trap yourself. You want to be especially careful with the little guys. As backwards as it sounds, their lesser length gives them a bit more maneuverability around your snake’s head.

If you see two other snakes duking it out, try to stay nearby but don’t get too close; you don’t want to alarm them! Whoever ends up biting the dust, quickly swoop in and eat as many particles as you can. You can get by very efficiently if you stick to this strategy, and you never have to work for your own food! Just be careful of players who catch wind of this, as they will relentlessly hunt you down!

We played slither.io and we made it to the top 10 snakes, albeit very briefly. It’s a fun and addicting game, so if you’ve got any other tips or tricks to share, let us know in the comments below!